Saturday a non-work day for the most part, yet I still often wake @ 630.  I almost always will play tennis early before the mid-day heat sets in.  Jess and I used to often go on a bike ride on the weekend to enjoy the SR countryside.  We would get lost but always find our way back home.  Some interesting sights we'd see.  We would come across 'Khmer mansions', very big houses always surrounded by a tall stone or concrete wall.  One would be by small wooden houses or thatched roof homes which were dwarfed by the monstrosities.  Another could be out in the middle of nowhere without any neighbors nearby.  I thought they always just seemed so out of place.  We would come across partially built structures, in fact there are quite a few of these even in town.  We speculate that when the economic downturn happened money dried up and these places were abandoned.  There are commercial/housing projects sprinkled around SR that are mostly empty.  Though I have noticed some of these seem to be getting tenants lately.  Perhaps a sign of the economy improving.  Occasionally we would come across folks selling food that we were not familiar with, like 'cookies' or prepared foods.  Or we would discover someone selling a fruit we haven't tried yet.  After almost 2 years I still find a new fruit I haven't tried.

I enjoyed those rides, but unfortunately shortly after Jess got her moto the weekend rides ended.  I suppose I could get on the road solo.  But I miss those rides, it was fun even if we got caught in the rain.  It was fun doing something physical with Jess, I miss the shared experience.  In Vermont we always said we would get out and ride our bikes when the weather got nice, but we really never did.  I kinda knew once Jess got the moto her bike would sprout cobwebs, it has.  Change happens. 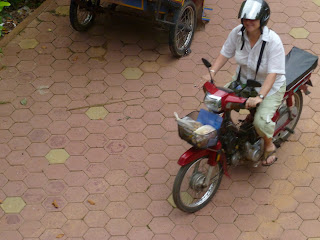 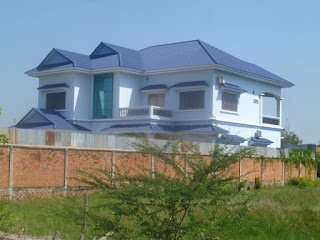 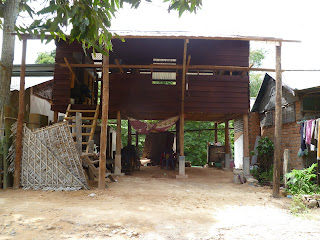 So Saturdays can vary in what happens after tennis.  It can include visits on our balcony from friends, both Khmer and Western.  Or just a mellow day computering or reading.  A nap can be a part of Saturday and often is.  Like in Vt. it's a day to play catch up doing errands not able to get to during the week.  Evenings we may eat at home or meet friends for dinner.  There seems always to be  a new place to try or we'll go to a tried and true place.  There are also a fair amount of social events in SR, I think we go out more often here that when we lived in Vt.  And there seems to be a goodbye party (leave do's as the Brits say) for somebody every other week, well that's an exaggeration but they do happen on a regular basis.  It could be for folks we know well or casually.  There is a joke among ex-pats here that when you meet someone new in town one of the 1st questions asked is 'how long will you be here?'  The thought is if someone is here let's say less than 6 months is the effort worth it only to be sad once again when they leave.  Like I said it's a joke so I think we all risk the potential future pain of saying goodbye to short timers.

I try to catch live music any night of the week and probably more happens on the weekend.  Opportunities to see live music is somewhat limited.  However there are some good acts here.  One band, my favorite to see, is called Cambojam.  They have some original songs but do quite a variety of covers.  The band members seem to be a expats and perhaps a Khmer guy.  I've met a few and know one's American, another  from Singapore, and one is from France.  Others not sure, perhaps Australian or Belgium.  They play anything from a song from the play 'Hair', to old rock tunes to 'Don't Worry be Happy' to Marley tunes.  There are some jazz players here including a woman with a very good voice.  There's also some folks in town who play acoustic material in a folk/rock vein.  On guy in particular from Austin who plays with various folks and usually plays weekly with a woman singer.  He's had at least a couple of different female vocalists.    He's the 'pool guy' here, he has a biz cleaning the hotel and guest house pools, nice guy.  And there some blues players here and they seem to fit the part of old grizzled musicians who have seen better days.  Well it's the blues after all, but they are pretty good.  Just like in Vt. I just don't get to see as much live music as I'd like.  That's what happens when you're beat by 9pm.  But here going out and drinking doesn't break your wallet, that's the good thing and not a deterrent as at home. 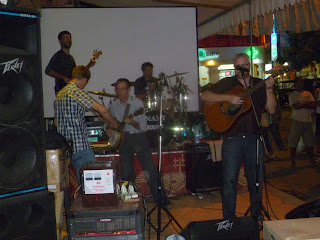 Sunday is much like Saturday, a non work day.  It's a day off for lots of folks and no school for kids, Sat. is a school day here.  I again usually play tennis in the morning.  So another day of reading, errands, nap, and  eating, drinking and being merry.  We do have cable tv here for the whopping cost of 5 dollars a month and we do get quite a bit of channels.  ESPN, lots of other sports channels, BBC news, CNN, Discovery, Natl' Geo etc... oh and movie channels.  But I really only watch sports, we get a lot more tennis here and of course, futbol or soccer as us Yanks say.  But I don't even watch sports that much.  We discovered that we can download almost all tv series, cable and otherwise and movies also.

Let me end by talking food.  There are items here that I should eat more of.  More greens, spring rolls (fresh and fried), nutella crepes which Khmers sell from carts, also these Vietnamese 'pancakes' which are huge and tasty.  They are a combo of meat and veggies and herbs and lettuce.  Love them. And these baguette sandwiches that Jaz used to get.  Ok some non-descrip meat in them but they look good.  They remind me of the sandwiches I used to get from the Viet markets in Burl.  Lately during the week I've been going to the same place to get lunch, take away lunch.  It's a little Khmer place that has pots of food and grilled foods, perhaps I've talked about this.  But one item they sometimes have is eggplant with minced pork.  It's a popular dish here and I love it.  Sometimes it's smoked eggplant and those are the best, one place in particular does a great one in that way.

One more thought.  I've talked about how food and drink is so cheap here.  But other expenses can be cheap also like clothes, shoes, socks, caps, getting some things repaired for example bikes.  I never liked spending money on clothes so it's ideal for me and I still, as in Vt., go to the used clothes places. 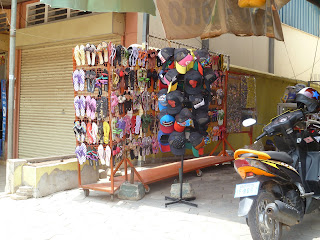 Ok one corny joke to end:  I realize my bike is like the Amex card jingo "I don't leave home with out it."  That is pretty much true except when I get lazy and ride w/ Jess on her moto.  But that's rare as I don't like motos.   Looking forward to the visit to the States and most likely will not blog for the month.  Ciao! 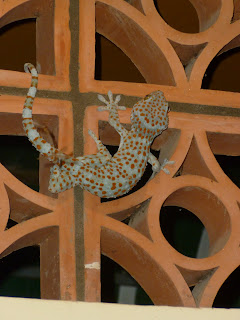 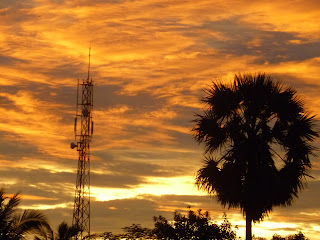 Hi Steve
It has been fun going through your week days and the routines you have. I have enjoyed the photographs of the sights and of the daily business like the cleaning of your bike picture in this blog. For me, getting a feeling of the place you live in has been the most fun. It is amusing how we all have different personalities, as one can see reading yours, Jess's and Jaz's blogs. Each one of you is pretty good at writing in an interesting way. I may have missed it, is this coming visit to Vermont temporary or are you going to strike out for some other part of the world next. My own plans are up in the air. I am working on a book with my friend Kimo which will take a few more months, and after that, who knows.
I wish you well on your journey back to Vermont. Say Hi to Jess for me.

Hi Tom, Not moving back just visiting there for June, mostly to celebrate Jess's 50th!! And of course to see family and friends. We still love Cambodia. Come for a visit! Thanks for your kind comments. Good luck with your book project.

How to get email updates about blog entries:

The easiest way to know if there's a new entry is via http://groups.google.com/group/jess--steves-blog-followers. Sign up for the group and you'll get an email every time either Jess or I post another entry.